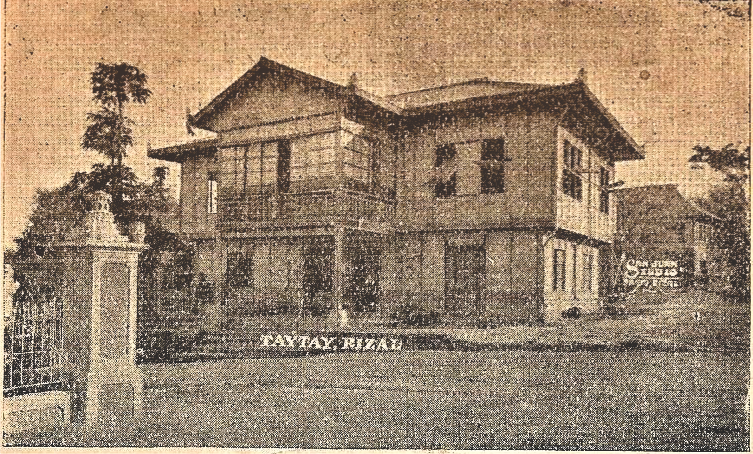 THE PAST GRANDEUR of the old Municipio-Plaza Libertad area with “Angel Love” and the early 20th century-old houses in the vicinity had gone. With them is a lot of historical value that has gradually dissipated from townfolks’ sight and memory.

What could be the legacy of certain buildings, structures, sites, and other things deemed belonging to local historical and cultural heritage?

The public seems not aware of the patronage we enjoy of the State which ought to foster the preservation of our historical and cultural heritage. Out there are significant things which have been in existence for at least fifty (50) years, and over time have been considered historic and presumed cultural properties of our town.

This matter is well within the ambit of Republic Act No. 10066, otherwise known as the “National Cultural Heritage Act of 2009, an Act providing for the protection and conservation of the national cultural heritage, strengthening the National Commission for Culture and the Arts (NCCA) and its affiliated cultural agencies, and for other purposes.”

Called as the “Escolopia” (big school building) was the original Taytay Primary School building situated across the Plaza Libertad in the early 1900s. It was demolished to give rise then to a new casa municipal, the Taytay Municipal Hall.

The Taytay Primary School was transferred and accommodated on the ground floor of the big house of Adaucto “Docto” Ocampo who served as the third municipal mayor in 1903-1904. Said school was located at the corner of Kadalagahan and Villanueva streets.

That same place was also occupied by BPI Family Bank of Taytay in the 80s; an ukay-ukay store in 2000s until recently. At present, it is now a branch of 7-11 Convenience Store. But still, just across the street is the remnant of the town’s old public market and the Kalayaan Park. The park which occupies an area of the public market is deemed as a replacement for Plaza Libertad that vanished subsequently. Obviously, “kalayaan” and “libertad” both mean “freedom”.

It was in April of 1914 that the Taytay Primary School was moved to a permanent location in Libed, Barangay Dolores. A better accommodation four-room building was constructed for the purpose. It was the precursor of the Taytay Elementary School (TES), the first elementary school in town. Ms. Rosario Ocampo, the sister of the former mayor Adaucto Ocampo, also mentored and became the principal of TES.

About 30 years after, Bangiad Elementary School was established in 1948 and started with only 60 pupils. By virtue of a Municipal Resolution during the incumbency of Mayor Manuel I. Santos, the said school was renamed to Rosario Ocampo Elementary School (ROES) in the 1960s; in honor of Ms. Ocampo, the distinguished first lady elementary school principal in Taytay.

On one hand, the St. John the Baptist Parish Church which is situated on a higher ground remained undisturbed on its abode fronting the Plaza Libertad. Interestingly, the respective addresses of the Church and the above-mentioned temporary Taytay Primary School at Ocampo’s residence are both at the Kadalagahan Street; only that they are at the opposite far-ends interrupted and cut short by the main thoroughfare (Rizal Avenue) of the poblacion.

It is interesting to note that the physical layout of the wider community was described as ecclesio-centric thus called bajo la campana—meaning, the Church was literally and figuratively built at the center of the town, and the townspeople were living under the peel of the bell.

In the hispanic concept of bajo la campana, the dwellings including the casa municipal-tribunal (municipio and court), palengke, botica, escuela, etc., were constructed around the church-and-plaza within the hearing distance of church bells. Such a layout approach was the Euro-Hispanic quadricula pattern from where our modern-day subdivision planning, zoning, and surveying originated the technique and application of using grid patterns.

Taytayeños seemed unaware of the original bridge casually called “Taytay” in the days of old that spanned the streets of Pulumbarit and Maria Clara along Camino Real (now Rizal Avenue). The very name of the Taytay town was coined after it. Whereas, the word “Taytay” is an old native word that meant “bridge”—“tulay” in Tagalog.

In those days, the poblacion townfolks needed to cross the “Taytay-tulay” to bury the dead at the campo santo on which the present San Isidro Elementary School (SIES) now stands. SIES was first established as a primary school in 1956 and became a full-fledged elementary school in 1958. The 5,000-square meter land area the school occupies was a lupang mitra donated by the Archbishop of Manila thru a deed of donation executed by Maria C. Tancinco and Cecilio G. Cruz on 5 June 1972.

It is fairly considered that the Franciscan missionaries from Santa Ana de Sapa (Manila) navigating down the Pasig River first met the settlement of natives in Taytay at the entry point in Sitio Batasin. From thereon, marked the beginning of organizing the settlers into the township in 1579. From Sitio Batasin (in the future Lupang Arenda area) had begun the founding of the nascent town of Taytay.

Lupang Arenda had been situated in a swampy lowland area along the eastern coast of Laguna de Bay. It was a vast tract of land within the territorial bounds belonging to the first resettlement—purportedly the very origin of the early town of Taytay. It was an agricultural encomienda that encompassed mainly of barangay “Mabolo” that we know at present as the Barangay Santa Ana, named after Francisco Santa Ana, a revered Christianized native leader. Two more barangays were formed—the barangays named “Sampoga” now known as Barangay San Juan, and the barangay named Bangyad now only a sitio belonging to Barangay San Juan. All-three barangays—Santa Ana, San Juan, and Bangyad—constituted the early town of Taytay as a juridical entity and specific territory.

According to former Mayor Felix M. Sanvictores (1925-1931), Lupang Arenda was donated by Juan Valerio Gonzales and Cristobal Paramdam to the Municipio in 1740. Aside from their own farmlands, Taytay farmers were also benefiting from farming in the arenda as well as fishing in the wide rivers flowing down the lake and in the vast flooded farmlands near the lake during the rainy season.

Perhaps, only the generation of the elderly knew about the “Birheng Dolorosa” image with an inscription at its back found on a nearby wide river in 1875. The inscription tends to lead us to believe that the said Dolores image was in existence even as early as 1701; and that, it could be the oldest religious artifact the Parish has in its possession. It was found during the time of Fr. Esteban Martinez, the cura parroco of Taytay Church (Parroquia de San Juan Bautista) from 1874-1879. Moreover, the inscription had attributed the making of the said image to a certain “Fr. Pedro Silva (Petrus de Sylva?) at a much earlier the year of 1701″.

CONCLUSION. More things of historical significance in and around our locality are still unknown and not yet duly recognized. Thus prompts us to preserve our cultural heritage for it is how we keep our integrity as proud Taytayeños. It is central to protect our sense of who we are as a community, town, and people.

Culture and its heritage reflect and shape our shared values, beliefs, and aspirations. As such, we are irrefutably connected to the past—to certain customs and traditions. Hence, our sense of unity, belonging to a community, both local and national identity, and pride as townsfolk and people is profoundly defined.

A “cultural heritage” recognized by one generation may probably be rejected by the next generation. But for all we know, only to be revived by a subsequent generation.

Therefore, ethics and rationale demand that what had been inherited should not be consumed, nay, destroyed but should be preserved, positively enriched, and handed over to succeeding generations. This ought to be a moral imperative.

Factors that can affect the daily life of society—other than a mere issue of the economy and “urban development”—must be considered before deciding a possible action affecting cultural heritage.

Many elements of heritage—both tangibles and intangibles—are important parts of our community. Buildings and infrastructures are threatened by destruction and oblivion. Others from extinction.

In the case of religious heritage, the hindrance to traditions like the parades, festive celebrations, rituals, and religious processions may adversely affect our socio-cultural psyche. It may significantly alter the daily lives of people and could even lead to suggest cultural degeneration and eventual disintegration.

We appeal for conservation. The significance of our historical and cultural properties be maintained. We admonish the safeguard of heritage by preserving buildings, sites, and other structures and materials of historical and cultural significance. They articulate our town’s history, architecture, archaeology (the ancient history or its scientific study), engineering, culture, and others.

Factors that can affect the daily life of society—other than a mere issue of the economy and “urban development”—must be considered before deciding a possible action that may adversely affect cultural heritage.

It is the best part of prudence to be more circumspect on the matter of history and cultural heritage of Taytay. One big step to start with is to declare as “Heritage Zone the entire scope covering the historical center of the población of Taytay and certain buildings, structures, sites, and other things found and included therein deemed belonging to local historical and cultural heritage.”