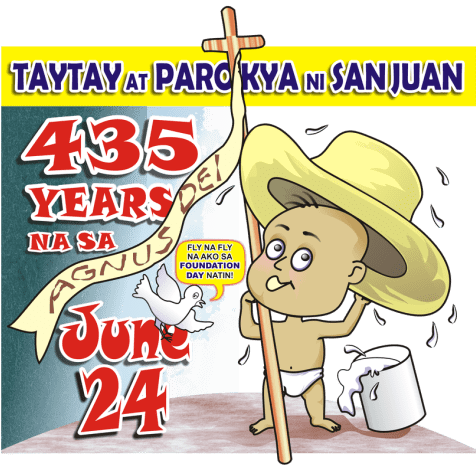 IN MANY places in the country, there usually appears a folktale, a legend so to speak, explaining the origin of the town and how it got its name. It is passed down from one generation to another manifesting the characteristics of the time and place from which it is told.  At times, legends may have elements of truth as pertaining to facts and history. They convey deep symbolic meaning as well as express the spiritual beliefs and culture from which they originate. And Taytay town has not only one, but a least three noteworthy legends of its own.

There goes the usual language-barrier-story of a Spanish friar who asked a local boy where on earth he was. For the puzzled kid just did not understand Español, he shouted out “Tatay, Tatay!” in order to call his father’s attention to be the one to deal with the said stranger. Thence, the friar came to believe that the name of the place was Taytay.

Another version puts it that the friar was elated when he thought he heard the kid calling him “taita,” a Spanish word synonymous to “padre” that also meant “father, daddy or uncle.” As a welcome gesture, the friar fondly named the place Taita. It metamorphosed to Taitay, then Taytay.

Since then, Tatay, Padre, Tata, have become revered words among Taytayeños. The new word Unte (uncle or aunt) was also added to the vernacular. We recognize the historical fact that the best of the Religious missionaries, also known as the “Paladins of Cloth”—the likes of Padre Juan Portocarrero de Plasencia, the linguist; Padre Diego de Oropesa, the charity-servant; Padre Pedro Chirino, the historian; Padre Antonio Sedeño, the administrator-educator; Padre Juan de Salazar, the architect-builder; Blessed Padre Diego Luis de Sanvitores and joined by Saint Pedro Calungsod, just to name a few—had set foot in Taytay and zealously worked from the very start of the town’s and parish’s foundation. With fitting reverence, we may address them Padre, Tata, Unte, or even Tatay!

Could it be a tree?

There is a tale that once upon a time, tagaytay trees grew in abundance in the town. It is averred that the name of Taytay was the transformation of the word tagaytay. However, the so-called tagaytay trees are nowhere to be found nowadays. Perhaps there was no such kind in this town nestled atop a hill which was Christened San Juan Del Monte (Saint John of the Mountain) in 1591 by Padre Pedro Chirino, its first Jesuit parish priest.

But, could it be the kind of trees that looked like the ones grown in abundance in Tagaytay, which like Taytay also situated on the mountain? Or was it just a tale inspired by Antipolo legend claiming its name derived from tipolo tree (scientific name: artocarpus blancoi)? Tipolo trees were once abundant in that mountainous area but are now gone.

In Mandaue City, in the Visayas, there is a highly-urbanized Barangay Tipolo, named after the tipolo tree. Tipolo is the most historic one as it was where the city of Mandaue began. Ferdinand Magellan, the famous navigator, landed on its shore and founded a settlement in that place on April 7, 1521. Whereas Miguel López de Legazpi, the conquistador, established in our country the first dry-dock complex in Tipolo in 1565.

Is it a bridge?

A much later legend has it that Taytay got its name from the word “tai-tai” which meant bridge to the Aetas wandering in the hills of Taytay in those days. Taytay served as the “bridge” of the missionaries to reach the heights of Antipolo [where the seat of the Diocese now resides] and the rest of the towns in Rizal and Laguna around the Laguna de Bay and extending to the mountainous regions reaching as far as Tayabas and Camarines in Bicol.

As per evaluation by Legazpi and his company who started conquest of Cebu and the Visayas, Manila and the rest of Luzon, Laguna and the Camarines seemed to have been the most populous places of the archipelago. Negritos who were called Hai-tan (Aeta), seemed to have been more numerous or more evident. Aetas lived in the interior of the valleys and hills. They were regarded as “low in stature.”

But there is a Barangay Taytay in Nagcarlan. There is also a Barangay Taytay and a Taytay Falls in the nearby town of Majayjay, which is now a wonderful tourist attraction. Nagcarlan and Majayjay are both riverine-rich. They were among the first towns of La Laguna that Franciscan Padre Juan Portocarrero de Plasencia, founded after that of Taytay and Antipolo in Rizal.

Nevertheless, Antonio Pigafetta, Ferdinand Magellan’s chronicler has it recorded. The earliest Taytay town was first found by the escaping crew of Magellan after he was killed in Mactan in 1521. Taytay was formally founded in 1623, more than a century later. It became the capital of the Spanish Province of Calamianes, the entire territory of Palawan, in 1818. Today, Taytay Municipality of Palawan has 31 barangays, and 4 Parishes that sooner will become a Diocese. Their hometown legend tells that Taytay was derived from the native word “talaytayan” which also meant a “bridge made of bamboo or wood.”

Nature has its way of affirming the origin of every person, a place, an event or anything, by giving each one a name. “Tatay, tagaytay or tulay”—all are well and good to serve as the origin of Taytay, the legend. Perhaps, there’s no harm to rely on oral tradition like the transmission of the above-mentioned legends.

We have unearthed the certainty of its name and origin by the historical records made available to us by the heralds of faith and civilization who lived way, way, ahead of us. What a wondrous heritage! At this present historical moment, it is but timely and fitting that Taytay (Rizal) is formally recognized as to its genesis. A formal declaration of its founding day, as a Position Paper on the matter asserts, must rest on the shoulders of the present generation. Taytayeños, proud as they are, ought to honor Mother Taytay.