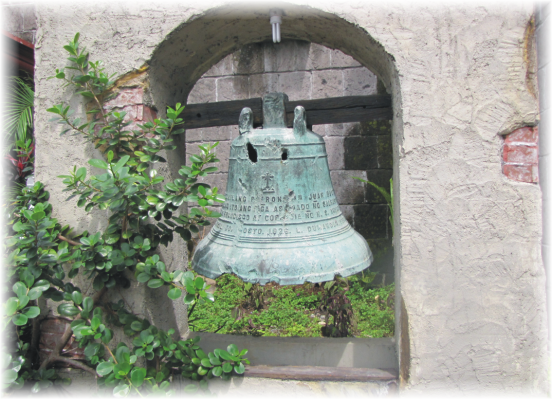 Under the peel of the bell

WHEN THE SPANIARDS came to the country, they found the natives living in either lineal or nucleated communities scattered along water routes and river banks, as well as in mountain ridges. In Taytay, the disparate settlements were mainly along lakeshore and waterways leading to the Laguna de Bay.

According to Fray Pedro Chirino, Taytay parish priest (1591-1592) in his Relacion de las Islas Filipinas, “…all the region around the lagoon is full of rivers, villages and grooves. The lagoon is of fresh water, has many islets which render it so beautiful. It abounds in fish, in herons, ducks and other water-foul. Above all, it contains crocodiles or caimans (buwaya) which cause great havoc among the poor fishermen and traders who navigate the river—especially in stormy weather, when the waters become tumultuous, as often happens, and swamp their vessels.”

To deal with such conditions, Franciscans employed the system of reduccion. Instead of “chasing the wandering souls of the natives,” they convinced the latter to establish a resettlement through such novel pattern known as the reduccion. The scattered and disparate villages were thus gathered into a newly formed community. The physical layout of the reduccion was “ecclesio-centric”—meaning, the church built at the center of the community, literally and figuratively.

The dwellings were constructed around the church-and-plaza within the hearing distance of church bells, or metaphorically, “under the peal of bells.” Bell sounds served as “criers” telling townspeople when and what to pray when to go to church, go home in the evening, and announce church services. Thus, it was called as reduccion bajo la campana.

Taytay under the bells

“The bell tolls the Ave Maria at dawn, at noon, and at night; and, besides this, someone is careful to go through the streets at night, sounding a little bell, and in a loud voice admonishing the people to offer prayers for the souls in purgatory and for those who are in a state of sin. These, as well as other pious and devout customs, had been introduced into [the] villages,” also narrated Fray Pedro Chirino.

The oldest existing religious organization in Taytay (Rizal) is the Cofradia de Anunciata [de Taytay] founded in 1878. The Cofradia once had kept a record they called “the black book” which listed all the demised townfolks. Until the end of the 1960’s, there was a man of the Cofradia  who dutifully went around the town ringing a small bell, shouting to publicly announce “who died on that day, from what family or clan (name, surname or label-bansag) the dead person belonged to, and when the burial would be.” [Related story: Cofradia de Anunciata de Taytay]

In the reduccion, houses were arranged and built around the church following a grid pattern or cuadrícula, a system of streets and blocks that were laid out with regular precision. This method of utilizing space was so efficient. Such model of town planning by the Spaniards was standard in all places and at different periods of time.

This had become the standard form or scheme for creating poblaciones and cabezeras, towns and cities. It was carried out since the days of nipa huts and colonial structures of Spanish era until the present-day condos and supermalls.

The cuadrícula system had been the “trusted padron” in the New World up to our present modern era. Compare this to present-day planning and development, zoning and housing, land titling and conversion, estate subdivision and geodetic survey practices, and we will distinguish their basic peculiarities.

The reduccion master plan was only formally presented by Fray Juan de Plasencia, the founder of Taytay town, during the first Synod of Manila in 1582 presided by Bishop Domingo de Salazar, a Dominican. It was unanimously approved by the ninety ecclesiastical and religious leaders and six captains or heads who attended. The sessions lasted until 1586; that was for four years.

Among the major agenda in the Synod was the governance of the new colony, the teaching of Catechism in the native dialect and the “rift between the Church and State” with regards to abuses committed by some encomenderos and civil officials against the natives.