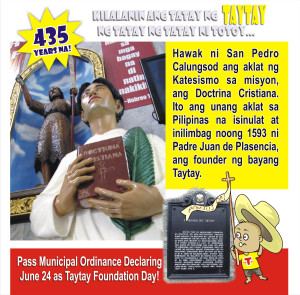 The pre-Hispanic “Filipino” literature was mainly oral rather than written. Augustinian historian Fray Gaspar de San Agustin wrote in his Conquistas de las Islas Filipinas, 1698: “They have their letters and characters… but never is any ancient writing found among them, nor word of their origin and arrival in these islands; their customs and rites being preserved by traditions handed down from father to son without any other record.”

Only In the Spanish era Filipinos started to write on paper and kept records of their property and financial transactions. In 1601, Filipino Christians had little “notebooks” where they kept records of Church Catechism lessons written in their “native characters and letters” known as the “Baybayin.”

“Baybayin” is a Tagalog term which refers to the letters in writing the language — we call the “alphabet”. It is derived from the Tagalog root word “baybay,” meaning “spell or spelling”; and “baybayin” means “to spell out.” Baybayin is a syllabary (phonetics). It appeared firsts in book prints of Juan de Plasencia‘s Doctrina Christiana in 1593, on Fray Pedro Chirino‘s Relacion de las Islas Filipinas y de lo que en ellas han trabajado los padres de la Compania de Jesus, 1557-1635 in 1604, and on Fray Pedro de San Buenaventura‘s Vocabulario de Lengua Tagala in 1613.

Fray Chirino who was once the parish priest of Taytay, wrote in his book that “the islanders were accustomed to writing and reading that there is scarcely a man, and much less a woman, who cannot read and write in the letters proper to the island of Manila.” (Taytay then was part and under the jurisdiction of Manila.)

Fray Chirino also discussed at length the usage of “Baybayin letter-characters” as he was greatly impressed that “by means of these characters, the natives easily make themselves understood and convey their ideas marvelously, he who reads supplying, with much skill and facility, the consonants which are lacking. From us, they have adopted the habit of writing from right to left. Formerly they write from the top to the bottom, placing the first line on the left (if I remember right), and continuing the rest at the right, contrary to the custom of the Chinese and Japanese—who although they write from top to bottom, begin from the right and continue the page to the left.”

It was observed by Fray Chirino that “the natives used to write on reeds, and palm-leaves, using as a pen an iron point; now they write their own letters, as well as ours, with a sharpened quill, and, as we do, on paper. They have learned our language and its pronunciation, and write it even better than we do, for they are so clever that they learn anything with the greatest ease. I had letters written by themselves in very handsome and fluent style.”

In places where friar-missionaries were assigned, their first task was to learn the native language or dialect. Some of them belonging to the first expedition to our country were well-acquainted with the methods of Fray Alonso de Molina, a 16th century Franciscan missionary in Mexico whose works include Doctrina Xtiana breve (1546), Vocabulario en la lengua Castellana y Mexicana (1555), Confessionario breve en lengua Mexicana y Castellana (1565), and Arte de la lengua Mexicana y Castellana (1571).

The first missionaries left us many writings in the Tagalog and Bicol languages. The best were those of Frays Juan de Plasencia, Juan de Oliver, Pedro de San Buenaventura, Miguel de Talavera, Diego de Asuncion, and Geronimo Monte. Plasencia and Talavera, while the latter was still a boy then, set foot in Taytay.

They mastered the Tagalog language, so much so that their writings were so common and well-received by all the Religious Orders. However, they have not been printed for they were so voluminous [and required approval of the King for funding].

Among the above-cited friars clearly stood out Fr. Juan de Plasencia. When the Franciscans held their first Chapter in the Philippines in 1580, among the resolutions was the tasking of Juan de Plasencia to compose a grammar and a dictionary of the Tagalog language.

However, Vocabulario de Lengua Tagala, the first printed Spanish-Tagalog dictionary was written by Fray Pedro de San Buenaventura in Pila Laguna in 1613. It was not just a plain dictionary-vocabulary; it also had the collection of some earliest local literature. It was printed by a “Chinoy”—Tomas Pinpin, the first Indio typographer-printer-publisher (Pinpin was with Dominador Laog).

Juan de Plasencia was a Franciscan missionary priest and an exceptional linguist, educator, administrator, and evangelist. He became Custos or Superior of the Franciscans in 1579-1580 and 1584-1588, but this did not impede him in his work with the native language. He authored several religious and linguistic books, among which the Arte y Vocabulario Tagalo, a grammar and dictionary of the Tagalog language which was most useful because of the ease it facilitated understanding and knowledge of a native language so alien to missionaries.

In 1585, he composed a Tagalog prayer guide to contemplation entitled La Santina, a catechism for use of the natives who did not know the Spanish language so that they can “connect and share” with the spirituality of their teachers.

Most notable work of his was the Doctrina Christiana (“The Teachings of Christianity”) which contained the basic elements of the Faith the missionaries propagated to the remote regions of the world. It was the most useful handbook they had with its Tagalog and Chinese versions, aside from its Spanish original. They were titled as the “Doctrina Christiana, en la lengua española y tagala, corregida por los Religiosos de las Ordenes” (Tagalog), the “Tratado de la Doctrina de la Santa Iglesia y de ciencias naturales” (Español) and the “Doctrina Christiana en letra y lengua China, compuesta por los madres ministros de los Sangleyes, de la Orden de Sancto Domingo” (Chinese).

The Doctrina Christiana (Tagalog) was the first book ever printed in the Philippines in 1593—earlier than the first book printed in America in 1640. It was printed for the first time in xylographs, i.e., each page of the book text was printed from one woodblock which was carved by hand. This was the manner of printing employed by the Chinese, a thousand years before Johannes Gutenberg invented the printing press with movable types sometime in 1439.

The Doctrina Christiana contains the basic elements of the religion which the missionaries were trying to spread among the unbaptized in the remote regions of the world, it was the most useful handbook they had.

The Misa Mayor was the community Sung Mass in which the entire parish (town-pueblo) was expected to attend on Sundays, holy days and fiestas. When the people gathered for the mass, it was also time to teach them the Doctrina Christiana. Such teaching or catechetical practice (kerygma) became an integral part of the liturgical function.

Essential tenets of the Catholic Church were most easily learned. The method used by the missionaries here in the country was practically the same as the one used in the evangelization of Mexico and rest of the Americas.

As in other missions, Taytay townfolks had the same Catechesis in Fray Chirino’s time. There were communitarian recitations or singing of the Tocsohan (teasing game or play), in which one party asks a question to be answered by the other party, the questioning and

answering roles being given reversed alternately after the correct answer has been given. That became a practice for the friars to apply some group dynamics like this to make the learning process creative and more pleasant especially to children. Fray Chirino wrote in his Relacion de las Islas Filipinas that “the emphasis was heavily placed on learning by rote memory, although understanding was also tested by regular question periods.”

In 1593, two years after Fray Chirino’s arrival in Taytay, he used the Tagalog Catechism adopted by the Synod of Manila which the Dominicans printed on woodblocks. He conducted his Catechism class every morning after Mass. He taught the children their prayers—not merely to recite but to sing them using the measure of the traditional Tagalog chants. “The music that once the vehicle of pagan belief would become the vehicle of Christian faith [which we regard today as ‘inculturation’].”

Once the children learned to chant the prayers, a procession would go around and through the village chanting and singing going to the church. Parents would follow and catechism class would begin for both children and adults.

Very few extant books of the Philippines have survived time, nature, man-made ravages of war. There was even no systematic attempt of preserving in archives and libraries the records of the past. The two fires of 1603 that burned the Dominican convent in Manila to the ground and the whole of Parian (Binondo) outside the walls of Intramuros, resulted havoc upon the historic records of the friar-missionaries. The only copies of early Philippine books that still exist today were those sent to Europe in the 16th, 17th and 18th centuries, and before the Philippine Revolution.

King Philip II had a copy of the Doctrina Christiana sent him by Governor-General Gomez Perez Dasmariñas in 1593. Lorenzo Hervas y Panduro who wrote a number of educational works for deaf mutes, was a Jesuit philologist, who printed Tagalog texts from that Doctrina book in 1785. Since then, no more example had been known or recorded by any bibliographer or historian. However, a “1593 copy of the book printed in Manila” surfaced in the hands of a Paris bookseller and collector who specialized in Pacific imprints in 1946. William H. Schab, a New York dealer, took the book and brought it with him to the United States. It was then purchased by Lessing J. Rosenwald, and in turn, presented the “find” to the Library of Congress.

The aforesaid book could be the very copy sent to Philip II or, perhaps, the copy used by Hervas that might have been gone astray during the civil war in Spain.

But, who knows, when the day will come that other extant books will resurface to shed light on matters of our historical past?